Gordon graduated in Physics from Newcastle University in 1968, and then joined Rolls Royce (Aero Engines) in Derby as a design engineer. After three years he switched careers and qualified as a Chartered Accountant with what is now KPMG spending six years with them. Gordon then worked for 20 years in finance roles with commercial companies including Arup (Engineers & Architects) and RTZ (now Rio Tinto) before a final move into the agriculture sector in 1998.

Gordon was Finance Director of HGCA (Home-Grown Cereals Authority) for nine years and then in 2007 became heavily involved with the setting up of AHDB (Agriculture & Horticulture Development Board) - acting as Interim Finance Director and latterly as consultant until early 2010. Gordon's connection with AHDB/HGCA continues however - as he is a Trustee Director of The HGCA Pension Plan.

On a personal level Gordon lives in south London with his wife Carol and they have three adult sons,seven grandsons and one granddaughter. 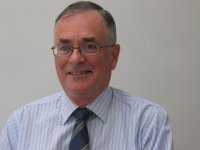